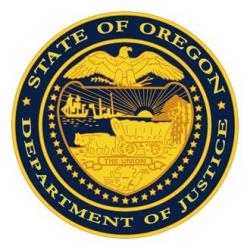 The Oregon Department of Justice (DOJ), headed by Attorney General Ellen F. Rosenblum, serves as the state’s law firm. The Oregon DOJ employs about 1,300 individuals statewide and has a biennial budget of approximately $550 million. The agency is headquartered in Salem and has ten legal and 13 child support offices throughout the state.

In addition to providing legal representation to state government, the DOJ advocates for and protects all Oregonians, especially the most vulnerable, such as children and seniors. The Oregon DOJ and its nine divisions are tasked with running programs related to child support », charitable activities », district attorney assistance, crime victim compensation » and consumer protection ».

In all, the DOJ and attorney general have responsibility and authority under more than 350 state laws.

The Oregon DOJ has nine divisions. They include:

Email me jobs from Oregon Department of Justice