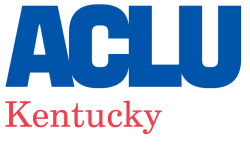 The ACLU of Kentucky has more than 8,000 members statewide. It is governed by a Board of Directors elected by the membership and its work is accomplished through a network of volunteers, coordinated by staff working out of its Louisville office.

The American Civil Liberties Union of Kentucky (ACLU) is freedom’s watchdog, working daily in courts, legislatures and communities to defend the individual rights and liberties guaranteed to all people by the Constitutions of the United States and the Commonwealth of Kentucky:

The ACLU also works to extend rights to those who traditionally have been denied them, including:

Email me jobs from ACLU of Kentucky